Everybody Deserves to Have Great Images​

For the Aspirational, Perfectionist, that wants better than usual Photography.

Vanity Studios is the modern-day hub of photography. We have proudly transformed what was once an industry built on model scams and quick fix / conveyor belt photoshoots into something high end and beautiful with a strong emphasis on self-love and individuality.

Our founder, Emeka Ikechi, obtained a degree in Computer Science and Business from Manchester University. He then started his career as a Marketing Consultant for a large studio in Central London and he quickly identified the flaws in the industry and sought to create something better. Taking note of the positive side of this business, such as its unique formula that opens professional photography to absolutely anyone, along with the obvious boost in self-esteem that clients get through this process, Emeka wanted to create something that fostered this without the altogether discreditable methods of promotion.

With an entirely different approach to any studio that had previously existed, he began to formulate Vanity Studios. Knowing that the concept of this business relied on like-minded people who not only had a shared dedication but were extremely creatively talented and exceptionally skilled in their field, he recruited some of the top players in the industry. Each member of the team wanted to be part of the future of the industry and went above and beyond from the get-go. The studio was simple and direct with the message that we do great pictures, and everyone should have them. Vanity Studios has never just been for models and even our earliest promotional material featured a variety of beauties in all shapes and size that went firmly against what was considered ‘normal’ beauty standards.

With the industry’s strongest creative team, some of which have been at the Studio now for more than ten years, Vanity Studios has endeavoured to be the best since opening its doors in 2009. With a focus on quality and ingenuity, we have been able to produce an incredible portfolio that stands out miles from its competitors. We are proud of what we have accomplished so far and we will continue to work towards expanding our message of self-acceptance and unapologetic vanity!

In our modern world, we are becoming more and more aware of the things that need to change. We believe in playing our part by associating our beautiful imagery with embracing your uniqueness and originality. We don’t believe in imperfections. Self-love really is the beginning of healing mental health issues and negative societal influences that create judgement and exclusion.

There is only one of you in 7 billion and you deserve to be celebrated. Perceived beauty is something that has been constructed by the media and not by the eyes of society. No matter what the medias perception of beauty is, we believe that originality beats it all and everyone should have a little Vanity…

We have the expertise to help you and we can’t wait to see you go from feeling anxious about your professional photoshoot to feeling empowered and excited once you’ve seen the end results!

The 8 Insider Secrets To Hiring a Photographer That Delivers

Inside you’ll discover our 8 insider Secrets you need to hire a photographer that wows and delivers. We’ll show you the steps we take ourselves when hiring a new member for our team, and why these steps are important. 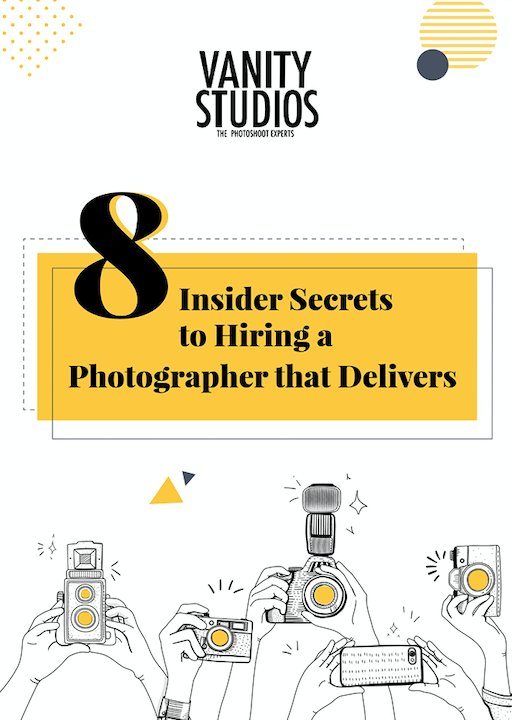 Get our FREE GUIDE

Just let us know where you’d like us to send it.

We promise to keep your email address safe.